Presented at University of Westminster.

Criticisms are frequently levelled at studies evaluating impact of music therapy. These include lack of comparable outcome measures, small sample sizes, brevity of intervention and follow up and a lack of detail of the music intervention (Vink, Bruinsma, & Scholten, 2010).

The purpose of this poster is to consider three recent studies with stronger methodological approaches. These evaluate eﬃcacy of group active music interventions on affective and cognitive outcomes in persons with dementia (PWD).

What is active music therapy?

“a combination of more than one musical therapy techniques that include active involvement of the participants, such as playing musical instruments, singing, song drawing, talking or dancing” 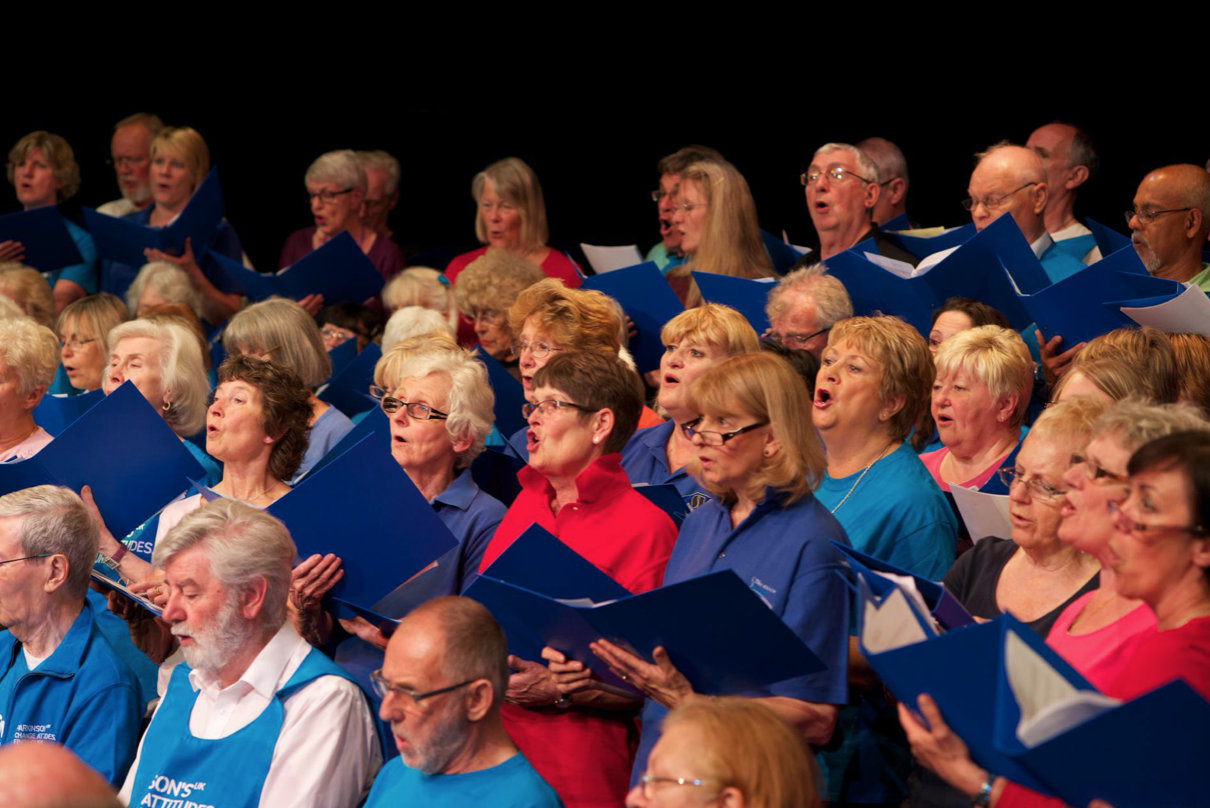 “Without music, life would be a mistake.” – Friedrich Nietzche 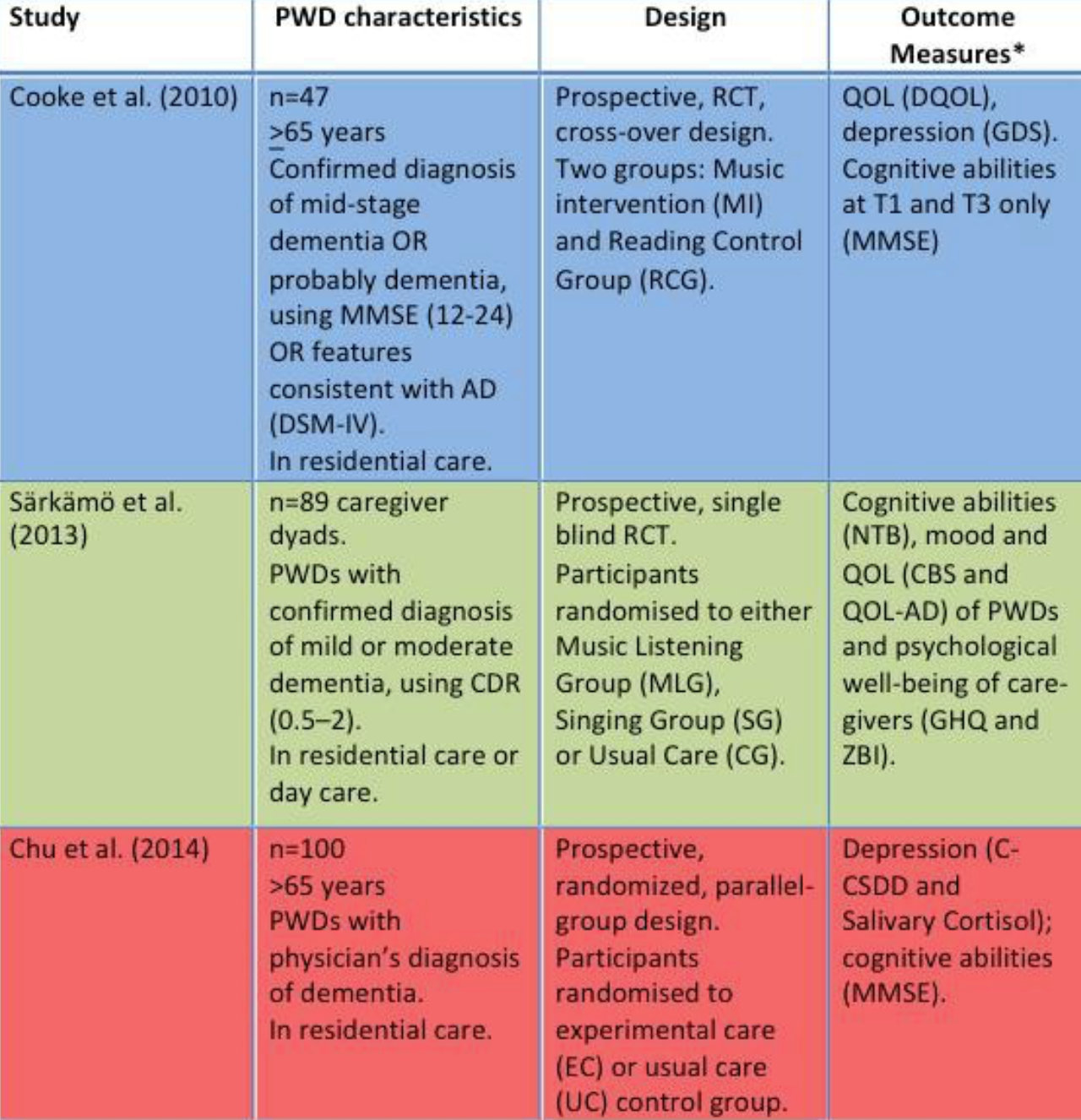 An overview of study duration and data collection time points: 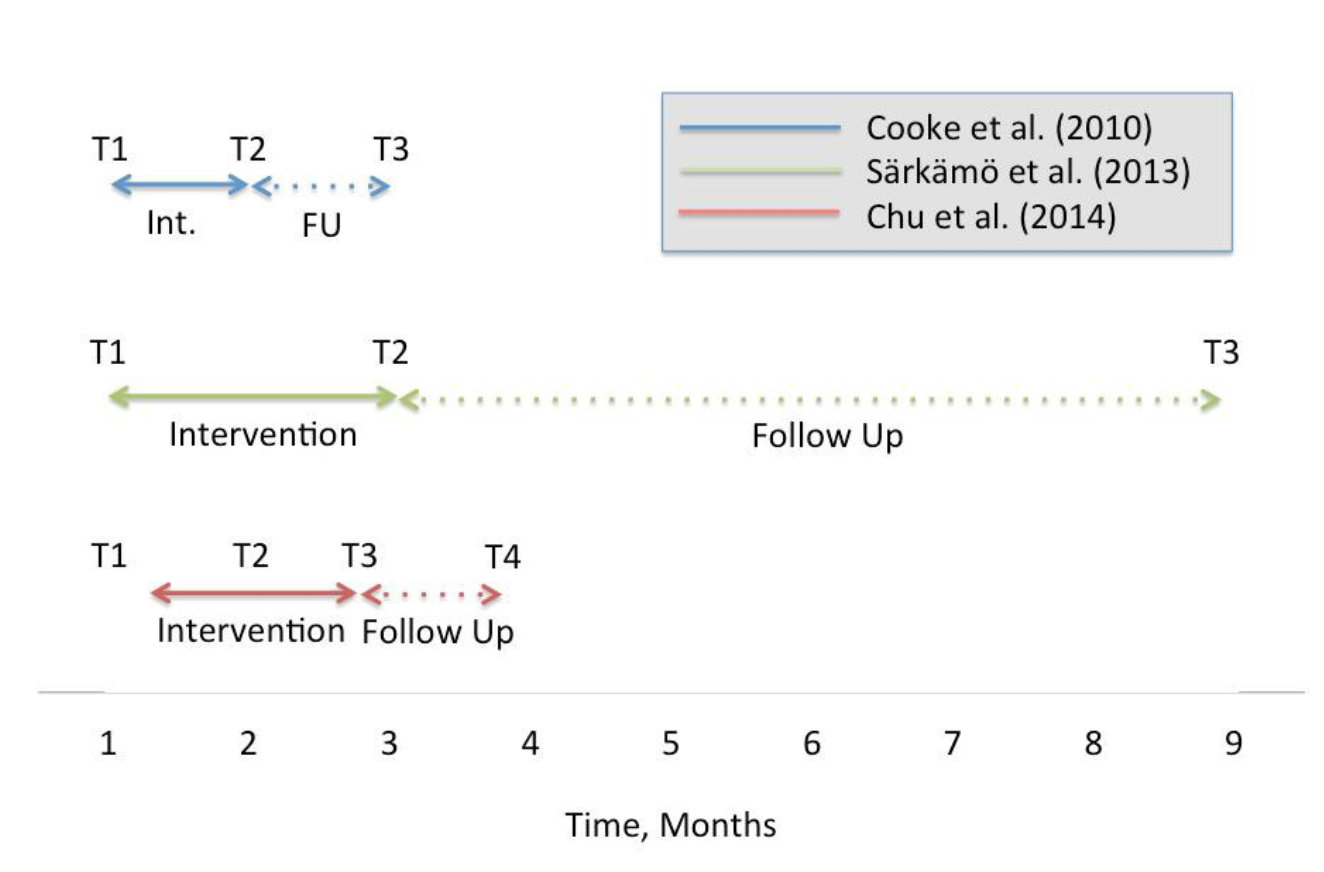 Two of the three studies used usual care as a comparator (Särkämö et al. 2013, Chu et al. 2014). Both showed statistically signiﬁcant ﬁndings for the music intervention/s. For cognitive variables, short-term improvements were reported in both studies, with Chu et al. (2014) also demonstrating long-term improvements at T4, where recall function was the strongest of the measured cognitive domains.

For affective variables, statistically signiﬁcant short-term improvements were shown in mood and QOL (Särkämö et al. 2013, Chu et al. 2014), across all music interventions, with these being highly signiﬁcant in the ﬁrst study (Särkämö et al. 2013). In Chu et al. (2014) the positive mood ﬁnding was restricted to the clinician-administered rating scales (C-CSDD) and not to the biological marker of salivary cortisol. Long-term mood and QOL improvements were only found in Särkämö et al. (2013) for the QOL measure in the music listening group (MLG).

Cooke et al. (2010) failed to show signiﬁcant ﬁndings for either outcome between the two study arms. However a sub-analysis of participants with higher levels of depression at baseline (>5 GDS) showed statistically signiﬁcant improvements in depression over time, slightly higher in the music intervention (MI) group than the reading control group (RCG). In addition there were notable midpoint improvements in QOL (DQOL feelings of belonging measure) for participants, higher for those randomised to the RCG first.

All studies showed cognitive and aﬀective beneﬁts of music intervention for the mild to moderate dementia patient. Chu et al. (2014) found that this did not extend to those participants classiﬁed as severe: the delay in cognitive function deterioration was not present at follow up. Särkämö et al. (2013) noted the lack of speciﬁcity in their cohort as a limitation, but oﬀer the possibility that this beqer reﬂects a real world PWD population. Cooke et al. (2010) suggest that the non-­‐ signiﬁcance of their ﬁndings could point to a greater need to screen patients more carefully, suggesting that patients with greater depressive symptoms may beneﬁt more. Although outside the parameters of this poster discussion, Särkämö et al. (2013) showed improvements for the PWD partner caregivers – a happy and important added beneﬁt for a population oRen in need of support.

What kind of intervention?

The studies indicate beneﬁt for all types of music intervention versus usual care. However Cooke et al. (2010) showed no beneﬁt versus the RCG. This supports ﬁndings that other structured leisure activities beneﬁt this population (Cabrer et al., 2014). Analysis in the Särkämö (2013) and Chu (2014) studies suggests relationships between the technique employed and outcome achieved, eg. the relationship between cognitive function, singing and rhythm. This is also well documented (Creech et al., 2013).

The immediate and positive eﬀect of active music therapy is established, although the literature debates whether or not this is transitory (Svansdocr & Snaedal, 2006). These studies’ ﬁndings contribute to furthering understanding of which of the acknowledged positive aspects endures. The novel trial design of Särkämö (2013) allowed some limited training of the caregivers, such that they were able to continue to conduct music activities during the follow-up period. There was a correlation between frequency of sessions (self-report only) and higher CBS scores.

These three robust studies contribute to the ﬁeld and further our understanding in tangible ways that support scalability and replicability and grow the evidence base for active music therapy. However there is an inherent limitation to the RCT design when evaluating music therapy for PWD. The individual nature of the music experience, the heterogeneity of aging and cognitive decline are important aspects that must be weighed against the beneﬁts of methodological rigour.